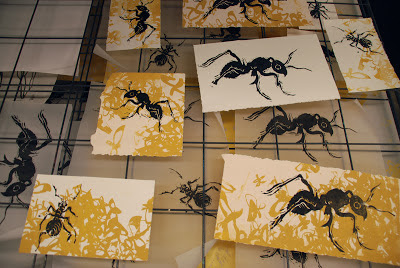 In preparation for the USM Atrium Gallery Exhibition "Ant Farm" in April 2014 , the latest meetings of the AG minds have broken down our production time month by month. Each month we gather to discuss, research, and print one aspect of the Leafcutter ant's life cycle.
In April we made lots and lots of leaves.
May was focused on the printing and engineering of "The Nuptial Flight" a.k.a. mating mid-air!!.
We, Ant Girls currently have no studio/home base(our former space is going through renovations,) to create our USM installation....so we've been Shop-hopping!
Thank you to both Peregrine Press and MECA's Printmaking Dept. for the temporary use of space.
We practiced good shop etiquette by leaving both spaces cleaner than when we arrived!
Check out Rebecca testing our leaf installation at her place. WoW!!! 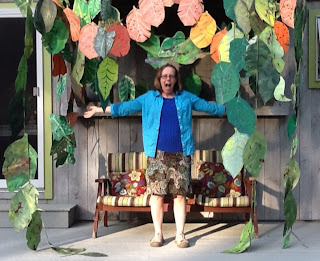 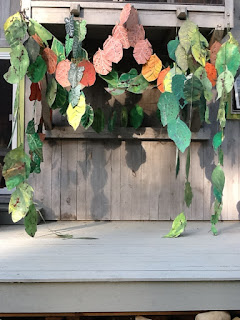 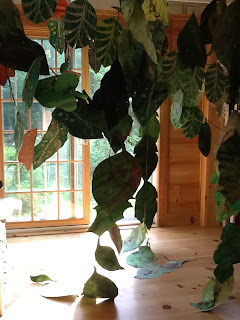 The nuptial flight of  Leafcutter Ants is made up of  winged sexual male and female ants taking to the skies to consummate their biological role in the cycle of life. The females are stronger in flight, naturally, handling the mid-air sex better than most males and the landing to hopefully become an egg-laying queen while the males, post-coitus, die.
Both sexes shed their wings. The successful queens eat the discarded protein-filled wings. 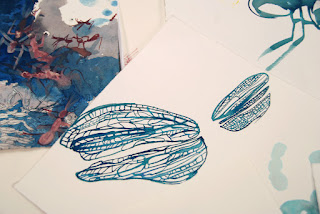 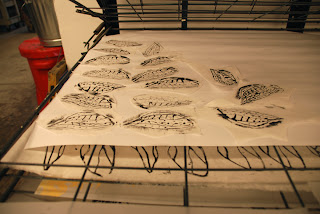 [Wingless queens of the leafcutter ant genus Acromyrmex that remain sterile and cannot found their own colony alter their behavior completely and, in contrast to fertile queens, help to defend their mother colony.

It was previously assumed that ant queens who lose their wings before their nuptial flight and remain unfertilized simply die. Some of them are also eaten by their sisters, allowing the energy stored in their bodies to be made useful for the colony. However, leafcutter ants feed on a fungus that they grow in their colonies and that provides them with plant nutrients. "We suspect that they have lost the ability to digest meat and recycle their queens," says Nehring. "There is thus an evolutionary advantage to keeping the sterile queens alive and making them useful for the colony in another way." They hardly have to feed at all, because they live from reserves and digest their own wing muscles like the fertilized queens.] Text courtesy of Albert-Ludwigs-Universität Freiburg

Below: Rebecca Goodale shows how to create a volumetric paper form which we will be using to create the nuptial swarm. 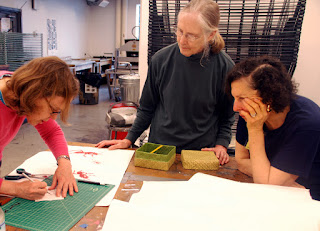 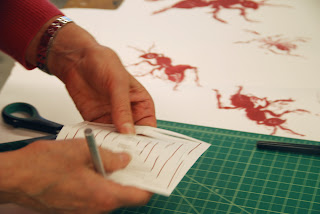